The Brief, in its different forms, represents the start of a project.

The Brief, in its different forms, represents the start of a project and a point of reference throughout a project's life cycle.

Most of the time though, the first brief you will get from a client will be inadequate. It will have vital information missing, it will be focussed internally on the clients business, there will be a lack of focus, and almost always the budget will be omitted. Sometimes, they even provide you with a solution! Clients don't make it easy for us. But, it's not their fault. Nine times out of ten, they will never have written a brief before. Have you? How do you write a good brief? What's involved in creating the four briefing documents discussed in the previous chapter?

This is the initial brief from a client. Sometimes, it's just a phonecall or an email. If you're lucky, you might get a comprehensive RFP including preliminary research results and detailed budgets and timescales, but this is the exception rather than the rule. Most of the time, regardless of complexity, an initial brief is like a handshake. It's an introduction. Some of the time, the client is just looking for validation from you that they've produced a document that you will find useful in getting a price to them. As with all handshakes, unless you want to be seen as rude, they should be reciprocated. It's important to note that receiving a brief from a client is the start of a conversation.

This brief is almost always invisible, unless you request it specifically. Sometimes, it's found in amongst a Functional Specification document, or as part of an RFP. If you aren't supplied one, I suggest you try and create one from whatever sources you can. Discuss it with a client and take pieces from the client brief – even if it's just a quick note on what browsers you're going to develop for, or what backend the system is going to run on. The important thing is to begin to draw a line in the sand as to what development is being done and to cover your back to some extent.

If you're heading up a large team – a senior designer, or team leader for example – then you will need to extract information from the Client Brief in order to brief your team on the job at hand. It falls on your shoulders to create this brief from scratch. Typically, writing a Creative Brief involves asking the client questions and speaking to a lot of people about different aspects of the project. For example:

The aim is to get together a working document with which to:

The Idea Brief is a sentence that describes the project aims. A good Idea Brief is a problem statement looking for a solution. It's used as a springboard for having ideas in Ideas Sessions (or Brainstorms). An Idea Brief is sometimes the most difficult to write. It needs to be short, concise and open. Good starting points for Idea Briefs are:

They start the sentence off in the right way – by asking a question. It's the designer's job to come up with the answer.

The Right Pair of Briefs ¶

So, you have your four documents, (or maybe, they're just discussions and scraps of paper at the moment – that's ok, they don't have to be manicured documents), now what do you do? Chances are, the brief is still going to be way off something that is actionable. Why? Well, let me introduce you to my briefs to explain all.

A flowery brief uses langauge that no one can understand. It's full of acronyms and abbreviations. There is no focus, but an emphasis on trying to impress the reader with over–complicated terms. It winds this way and that, and then, like an episode of LOST, abruptly stops leaving you with a head full of questions.

Woolly briefs are vague and lacking specifics. Whilst they're better than a Loose Brief, they will still provide little insight into the direction of the project. They leave too much to the imagination.

A tight brief is the opposite of loose. Restrictive and too focussed, they spell out the requirements and provide a solution. It's then left to the designer to just implement them. Depending on the client, these are the worst kind of brief to receive – unless your design matches the clients perceived solution exactly, then they're not going to be pleased. If one of these lands on your desk, think twice about taking it on. 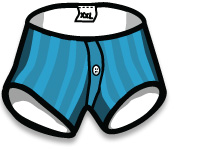 Loose Briefs are too open and not focussed. 'I want you to give me ideas' would be the classic first line of someone giving you a loose brief. Worse still, they generally end there.

The ideal brief is a brief that isn't too loose, or too tight. It's not woolly, or flowery, but fits just right. It is open enough to facilitate the creation of the other briefs, particularly the Idea Brief. It is clear, and uncluttered.

The Funnel of Focus ¶

The Funnel of Focus is an important visualisation aid in further defining a brief. Imagine a funnel: wide at the top and narrow at the bottom. At the top, is the 'blue–sky' thinking–purely conceptual. At the bottom is specific, focussed thinking. Somewhere in the middle is the place for the ideal brief. A brief may start at either end of the Funnel. With definition, it could travel up, or down, to that centre point. You're after a brief that is tight enough to be clear, but loose enough to be able to be used as a springboard to create the Idea Brief and Creative Brief.